Welcome to my Blog!


Mauricio Borgarello is a dancer, organizer and choreographer from Montevideo, Uruguay.
He started dancing Tango in the year 1999 by the hand of teachers Sergio Rodríguez and Verónica Lagomarcino. A few months later he was taking more and more tango lessons, he started courses with Dancer Omar Correa and then with Esteban Cortez (Esteban and Evelyn), these are the teachers that shaped Mauricio´s first steps.
From the year 2002 on he begins a new stage in his professional education, studying the basics and the foundations of the dance with Esteban Cortez and Evelyn Rivera; and Martín Borteiro and Regina Chiapara. He also starts travelling regularly to Buenos Aires, where he takes lessons with, among others, Pablo and Dana, Mariano “Chicho” Frumboli, Mauricio Castro, Claudio Gonzales and Melina Brufman, Matias Facio and Kara Wenham, etc.
Mauricio´s training includes also contemporary dance classes with dancer Federica Folco, Yoga lessons with the teacher Virginia Arzuaga, and Jazz dance with Gustavo Perez.
In his career as a dancer we can highlight his participation in the “Primer Encuentro de Bailarines del Rio de la Plata” next to world famous couples like Esteban Cortez and Evelyn Rivera, Gastón Torelli and Mariela Samenthband, Matías Facio and Kara Wenham, Raúl Masciocchi and Karina Colmeiro.
He has also danced in the main stages of the city of Montevideo and he has appeared many times in different TV shows.
As a choreographer, his work was awarded in the last edition of the Carnival of Montevideo where, together with dancer Moira Daloia, they created the Stage Tango choreography of the winning group of the most important popular contest of the country. 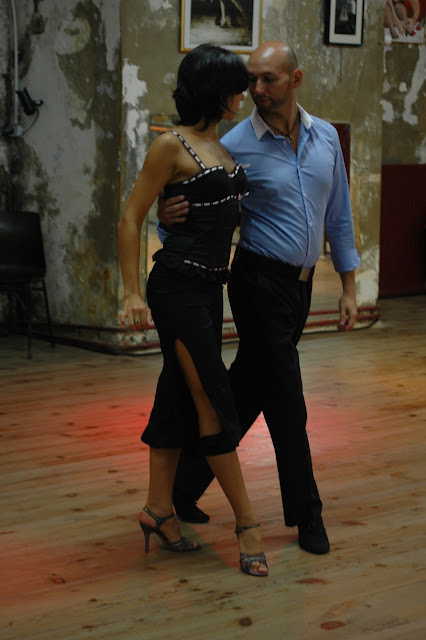 Tango dance and tango music originated in the area of the Rio de la Plata, and spread to the rest of the world soon after. It is a dance that has influences from European and African culture.  Dances from the candombe ceremonies of former slave peoples helped shape the modern day Tango. The dance originated in lower-class districts of Buenos Aires and Montevideo. The music derived from the fusion of various forms of music from Europe. The word "tango" seems to have first been used in connection with the dance in the 1890s. Initially it was just one of the many dances, but it soon became popular throughout society, as theatres and street barrel organs spread it from the suburbs to the working-class slums, which were packed with hundreds of thousands of European immigrants, primarily Italians, Spanish and French.
Tango is a social dance and musical genre, written in 4/4 measure and with binary musical form. Its lyrics and music are marked by nostalgia, expressed through melodic instruments like the bandoneon. Originated at the ending of the 19th century in the suburbs of Buenos Aires and Montevideo, it quickly grew in popularity and was internationally spread. Among its leading figures are the singer and songwriter Carlos Gardel, composers like Mariano Mores, musicians like Osvaldo Pugliese and Ástor Piazzola, and dancers like Juan Carlos Copes, Miguel Angel Zotto and Gustavo Naveira.
In 2009, Argentina and Uruguay suggested that the Tango be inscribed onto the UNESCO Intangible Cultural Heritage Lists and in October of the same year UNESCO approved it.
Publicado por mauricio borgarello en 4:33