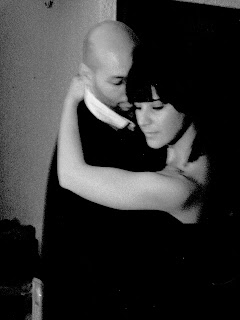 Mauricio Borgarello is a dancer, organizer and choreographer from Montevideo, Uruguay. In his career as a dancer we can highlight his participation in the “Primer Encuentro de Bailarines del Rio de la Plata” next to world famous couples like Esteban Cortez and Evelyn Rivera, Gastón Torelli and Mariela Samenthband, Matías Facio and Kara Wenham, Raúl Masciocchi and Karina Colmeiro.

He has also danced in the main stages of the city of Montevideo and he has appeared many times in different TV shows. He has danced with several local Tango Orchestras, particularly in the last years “El Calo Trio” . Tango-Fusion group led by Andrés Calo one of the most important guitar players of Uruguay.
As a choreographer, his work was awarded in the last edition of the Carnival of Montevideo where, together with dancer Moira Daloia, they created the Stage Tango choreography of the winning group of the most important popular contest of the country.
Mauricio Borgarello started dancing Tango in the year 1999 by the hand of teachers Sergio Rodríguez and Verónica Lagomarcino. A few months later  he began with more and more tango lessons, he started courses with  Dancer Omar Correa and then  with Esteban Cortez (Esteban and Evelyn), these are the teachers that shaped Mauricio´s first steps.
From the year 2002 on he begins a new stage in his professional education, studying the basics and the foundations of the dance with Esteban Cortez and Evelyn Rivera; and Martín Borteiro and Regina Chiapara. He also starts travelling regularly to Buenos Aires, where he takes lessons with, among others,  Pablo and Dana, Mariano “Chicho” Frumboli, Mauricio Castro, Claudio Gonzales and Melina Brufman, Matias Facio and Kara Wenham, etc.
Mauricio´s training includes also contemporary dance classes with dancer Federica Folco, Yoga lessons with the teacher Virginia Arzuaga, and Jazz dance with Gustavo Perez.
He started teaching back in the year 2003 when he begins giving classes at “the Alianza Francesa (Fench Alliance),” and since then he has constantly given lessons, be it in group or private, to local and foreign dancers; including all levels, from absolute beginners to professional dancers.
In 2011, Mauricio moved to Switzerland where he began to teach in different cities of the country (Geneva, Lausanne, Nyon, Vevey, Montreux, etc).
He has worked internationally in several festivals in France, Switzerland, Russia, Spain, and Germany; as he has worked with several well known dancers such as Cecilia Piccini, Anna Yarigo, and Paola Aguilera.
Throughout these years Mauricio has been looking to combine the knowledge of anatomy and movement that comes from contemporary dance and yoga with the feeling and passion of Classic Tango, trying to achieve a style of his own but at the same time taking care of, and keeping the essence of this such unique and special dance that has a strong River Plate identity.
In this Tango dance conception, the focus  is on the connection  with the partner, the improvisation and the musicality, understanding that in any Tango couple there are three members: the man, the woman, and the music; and that good dancing comes from the smooth and harmonious connection among the three of them.